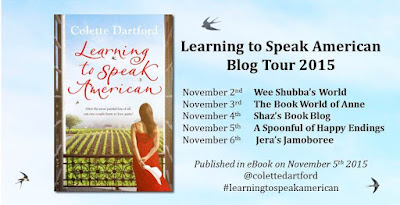 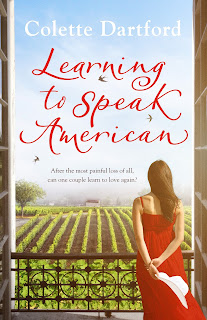 "After the tragic death of their only child, Lola and Duncan Drummond’s last chance to regain their lost happiness and rebuild their marriage lies in a trip to America. Day tripping in the heart of California’s wine region, the couple stumble across a derelict house in Napa Valley that’s crying out for love and attention.

It’s a far cry from their life in the Somerset village they call home, but Lola immediately falls for the house and shows the first spark of enthusiasm since the death of Clarissa. Unable to talk about Clarissa, Duncan reaches out to his wife in the only way he knows how, buying the house in the hope that the renovation project will bring both Lola and their relationship back to life.

As Lola works on the house she begins to realise the liberating power of letting go, helped along the way by her new Californian friends including easy going blond and blue-eyed project manager, Cain McCann. He may be 10 years younger than Lola, but his surfer good looks and easy charm work wonders, and soon Lola finds herself opening up for the first time in years.

Unbeknown to Lola, back at home her life with Duncan has begun to fall apart. Still emotionally scarred from his daughter’s death, Duncan starts to lose deal after deal in his high flying London job. Finding release in a series of one night stands, Duncan convinces himself he still loves Lola and promises himself that each infidelity will be the last…until he meets Saskia.

As Duncan and Lola get caught up in a series lies and indiscretions, drifting into the arms of others, will they be able to untangle their relationship or will the distance tear them apart?"

This is a beautifully written book, with engaging characters and a powerfully emotional storyline. Colette Dartford really transports you to Lola and Duncan's struggle in rural Somerset where they are dealing with their daughter's death in very different ways. Lola just wants to remember her daughter but Duncan can't bear to talk about her which is damaging their relationship, especially when they are surrounded by memories of her in their home. I found it difficult to like Duncan's character at times but I did feel sorry for him.

In complete contrast is Napa Valley, California where they go on holiday to try to rebuild their marriage. A place of sunlight and warmth and hope, Lola finds freedom from the weight of her grief in California. The derelict house they find and decide to renovate gives her a project and brings new focus to her life. The characters in California are so warm and friendly that it is not surprising that Lola begins to feel more at home in California.

I would give this book 5 out of 5, I highly recommend it. The message of hope is wonderful.

Learning to Speak American, is Colette Dartford’s debut novel and is based on Colette’s personal experience of renovating a derelict house in California’s Napa Valley. Following buying and renovating the house, Colette lived there with her husband for many years before moving back to the UK. Before becoming a writer, Colette worked as a Political Research Consultant in public policy for many years and has an MPhil in Political Science. Her second novel, The Sinners, will be published by Bonnier in 2017.

My Q&A with Colette Dartford

What inspired you to start writing?

I had always enjoyed creative writing as a hobby but it was moving to the Napa Valley that inspired me write a novel. I was sitting on the deck of my newly renovated house, sipping a glass of wine and watching the sun slip slowly behind the mountains when the title, Learning To Speak American, jumped into my head and stayed there.

What is your favourite part of being a writer?

Seeing the thoughts and ideas that have been buzzing around in my mind take shape on the page. And there is something hugely satisfying about seeing a manuscript go from those first few pages to over three hundred – physical evidence of all your hours of hard work. But of course the eureka moment is getting a book deal and seeing your novel in print.

What made you decide to move to America?

Like the fictional Duncan and Lola Drummond in Learning To Speak American, my husband and I went there to celebrate a wedding anniversary and fell in love with the Napa Valley. We bought a run-down house and turned it into a beautiful home. It was only ever meant to be for holidays but the more time we spent there, the more we realised we wanted to move our life in that direction. The economic recession brought our Californian dream to an abrupt end but it was a wonderful experience.

What were the best and worst things about the move?

The best thing was the sense of adventure – the feeling that we were following our dream. And we already have a house and lots of friends in the Napa Valley so that made the transition easier. The worst thing was missing the family and friends we had left behind in England.

Where are your favourite places to visit in California?

San Francisco is an amazing city with its iconic Golden Gate Bridge, the sparkle of the Pacific Ocean and impossibly steep streets that seem to go on forever. The Napa Valley is 80 miles north of San Francisco and dense with vineyards that produce some of the world’s most highly prized wines. A few times we have driven along the coast road – the Pacific Coast Highway – all the way from San Francisco to Los Angeles, stopping at Carmel and Big Sur. But no trip to LA would be complete without a visit to Hollywood and a cocktail at Soho House. You never know who you might see.

Have you started writing your next book?

It’s already written. The Sinners is being published by Bonnier in early 2017. I'm working on the edits at the moment and have another novel in progress – Writing For Prizes.

What’s your favourite book that you’ve read so far this year?

I belong to a book club so am sometimes pleasantly surprised to enjoy a book I would never have chosen to read. One such book was The Signature Of All Things by Elizabeth Gilbert. It’s about a nineteenth century American botanist – not an easy sell – but was ambitious in scope and so beautifully written I was disappointed when I finished it.

What are you reading at the moment?

When and where would we most likely find you reading?

Anywhere! I always have either a book on Kindle with me in case I have the chance to steal a few minutes reading time. My favourite place to read is in bed but today I was on the tube and so engrossed in my Kindle that I missed my stop.

How can people follow you or connect with you on social media?

Because I have a fairly unusual name it’s easy to find me online. My website is http://colettedartford.com, my twitter is @colettedartford and FB is Colette Dartford Author.

And finally, if you could meet any character in any book you have read, who would it be and why?

That’s such a difficult question. When I was seven I read a book called The Ship That Flew by Hilda Lewis and the main character was a boy named Peter who had a magic ship that took him on incredible adventures. It captured my imagination to the extent that I still remember the joy of reading about those adventures. I would love to meet Peter and ask him about them.
Posted by Anne at 3.11.15

Let me know what you think :)

Anne
United Kingdom
Essentially, I am a bookaholic and a chocaholic. I'll read anything I can get my hands on. This is where I share my thoughts on the worlds I discover. 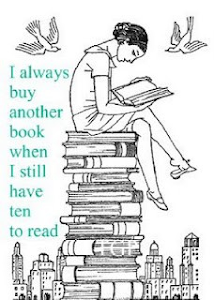